Close
Close
back to top

How We Stopped The Bottle

Once our baby Willa turned 1 year old, we started thinking about how we were going to wean her off her bottles.

We’ve been following Solid Starts for most of our baby led weaning tips and tricks, and they have some great information on scheduling as well! I read their post on Baby Feeding Schedules and it said we should be aiming to drop all bottles by 15 months. Our pediatricians were supportive of this as well so we made a plan to work towards this since Willa was past 1 year of age!

Here’s why and how we went from 4 bottles a day to none in a pretty slow, gentle and pain-free way! Scroll to the bottom to see our sample feeding schedules and how they evolved over this time.

Willa was ready. She was already starting to stop drinking her bottles halfway through for the 2nd and 3rd bottles of the day, so this was a sign that she was ready to wean. Very useful – thank you, Willa!

Willa is not picky about her milks. Another thing that really helped our cause is that she has never been picky about her milks, thank goodness. Going from breast milk to formula was a really easy transition when I stopped breastfeeding / pumping. We slowly introduced 1 oz of formula into her bottles, then 2oz, etc. and she never really showed that she cared, noticed, or minded. Once we were advised that formula was no longer necessary after 12 months of age, we did the same with introducing cow’s milk / alternative milks and she was happy with any combo of milks.

At 12 months, we decided to keep the morning and night bottles as is and began to slowly get rid of the middle two bottles of the day. We reduced the bottles by an ounce or half an ounce at a time for a few days until she got used to the new amount, then reduced again, etc. until she was down to 1 oz. Then one day we just cut them, and she didn’t seem to miss them at all!

We talked her through it and began to introduce snacks. At first, with the reduced amount, she would get a bit annoyed. She would whine a bit and ask for more, but we would talk to her about what we were doing and that there was no more milk for now. We showed her putting the bottle into the sink and would help her say “bye bye” to it, and she seemed to accept that. We also began to offer small snacks at the beginning of reducing her bottle with water, then when we took them away fully we replaced her bottle time with snack and water time. Shout out to Solid Starts 101 Healthy Snacks for Babies and Toddlers – it’s our go-to list for snack ideas! p.s. Can you tell I am totally into everything Solid Starts yet?

At 13 months, we decided to slowly reduce the morning bottle. We started by reducing it by half an ounce for a few days, then another half ounce or so, etc. The same rigmarole as the other bottles until we cut it completely. On the first day of doing 4.5 oz instead of 5 oz (her regular amount) she was pretty displeased but quickly got over it. She asked for “mmmmmmmo” (more) and “pleeeeeeesh” (please) but I explained to her that it was all done and no more and that we are slowly saying goodbye to our morning bottle and she was okay with it. We also offered eating breakfast earlier than usual which she was also happy with. We usually wait about an hour after her full bottle before breakfast, but going straight into breakfast after bottle was helpful with the transition.

So we’ll make the bottles less and less and then go straight to making / eating breakfast and then hopefully this works out! At 14 months, we’ll start reducing the night time bottle and by 15 months we’ll be off all bottles completely, fingers crossed! Then a few months will go by and we’ll have to start from scratch with the little friend in my belly! GAH!

June 8, 2021: Checked in with Mark today as he does 99% of Willa’s morning wake ups and bottles – Willa is at 3oz and is totally cool with it. Apparently she finishes and then goes ‘bye bye’ to signal that she’s fine with being done. Go, Willa! Another note here to say that we are still offering her full night time bottles at 5oz and don’t really plan to start reducing those until she is 14 months old, but she is already starting to stop at around 4oz, sometimes even 3.5oz. So I think she is just starting to be okay with no more bottles in general. Thanks, little team player Willa!

One other note – I do not think this is necessary but we are offering Willa a bit of milk with breakfast which she has been enjoying out of an open cup. I know some babes don’t love the taste of milk, so we wouldn’t make her have it if she didn’t want it but she seems to like it so we’ll continue with this for a bit! We give her a few ounces and then switch to agua and let her know when we make the switch so she knows what she has available for her beverage.

June 26, 2021: Willa turns 14 months in a few days, and she’s been fully off her morning bottle for about a week or so now and has adjusted well so we started with taking 0.5 oz away from her night time bottle today! She already was starting to slow and stop towards the end of her bedtime bottle so we know that she’s ready for this. She also drinks lots of water with dinner then has this bottle so we’ve noticed her diapers in the morning are very full of pee so we think this is a good sign to stop as well as she is clearly getting more than enough hydration before bed!

We’ve had a really positive experience with stopping our bottles as Willa has clearly indicated that she is ready to stop, so this has been a good feeling because it seems like we are following her lead and at this rate, I think we’ll definitely be off all bottles by 15 months which was our goal. I think if she was really reluctant to let them go, we would work with her to adjust and pivot our plans, but in this instance we’ve all been on the same page which is great.

NOTE: Once we started reducing our bottles we always made sure Willa had water regularly available throughout the day, in an open cup or straw cup.

July 6, 2021: Willa’s first bottle free day! Last night, we were down to 2 oz and after 1oz she pushed the bottle away, put the cap on and said bye bye to it. Actually, she also demanded that we give it to ‘dada’ so he could take it away – lol. So tonight we offered milk at dinner in an open cup and told her we wouldn’t do a bottle and she was okay with it! At meals, she loves to check out the milk carton and gives the cow a little kiss before moving on with her food.

July 9, 2021: We had our 15 month appointment with our pediatrician (a little early) and I explained that we were finished our bottles, and that we were offering milk at breakfast and sometimes dinner – Willa is now currently drinking perhaps 4-10 oz a day. Our doctor said that until the age of 2, he would like to see her drinking about 12-16oz of full fat milk or a milk alternative with similar nutrients (i.e. pea milk), no more than 16 oz. He doesn’t want the milk to replace food though. He said the reason for upping her milk a bit more is because it’s a good source of many different essential nutrients for a growing baby. He also mentioned that for a girl especially, she needs it to build her bone density and strength.

So going forward, we will offer her a little more milk with her breakfast and dinner + dairy products throughout the day like yoghurts and cheeses (which we already have regularly in her diet). We are not going to stress about reaching the 12-16 oz mark because we are pretty close already, plus our babe likes her food, is getting a good variety of everything and seems healthy and happy!

Overall – a successful journey (not a huge fan of that word but I can’t think of any other word at the moment hehe) to weaning off and stopping our bottles!

Reach out if I can help with anything – always happy to share our experience and answer any questions! Thanks for reading and make sure you check out my YouTube channel – I did a video that explains everything in this blog post! 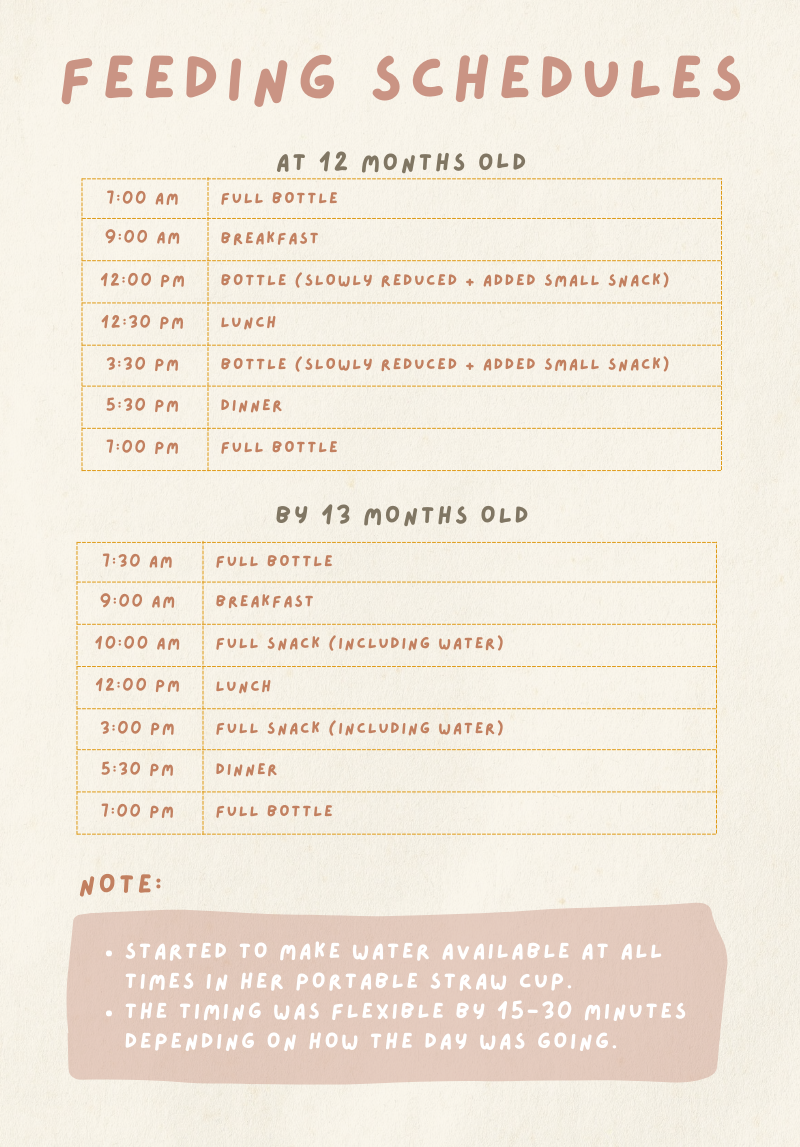 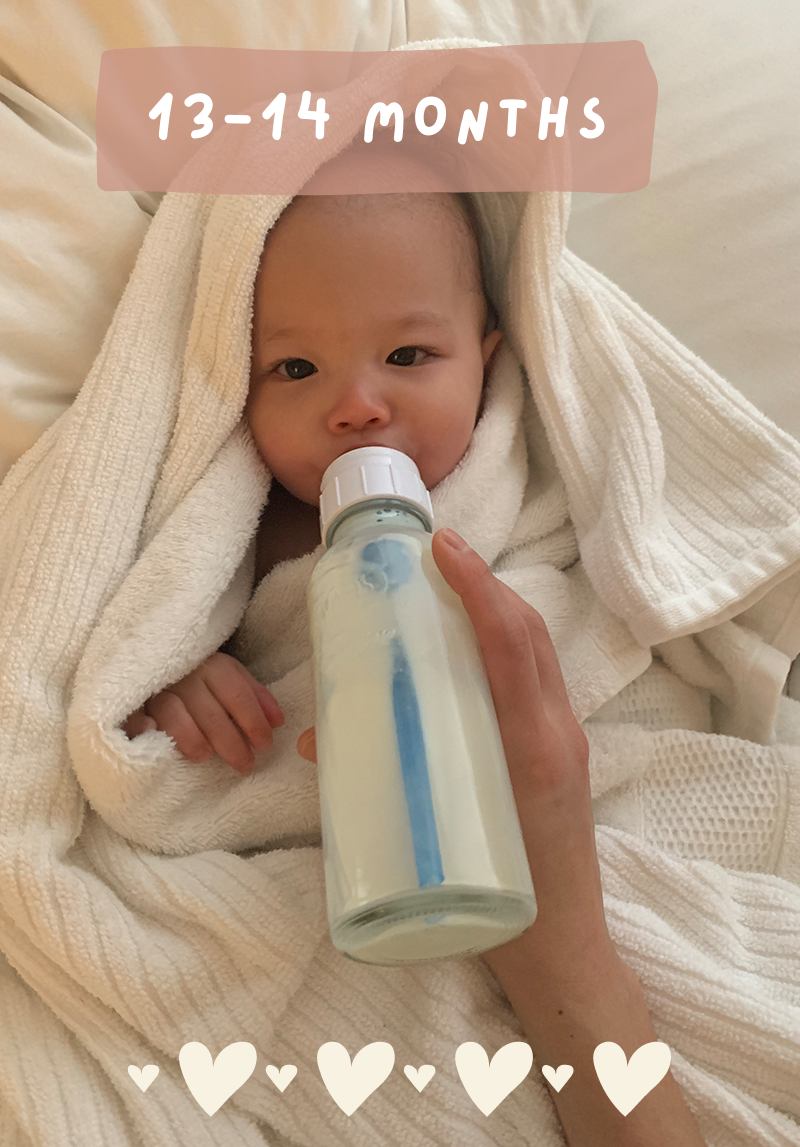 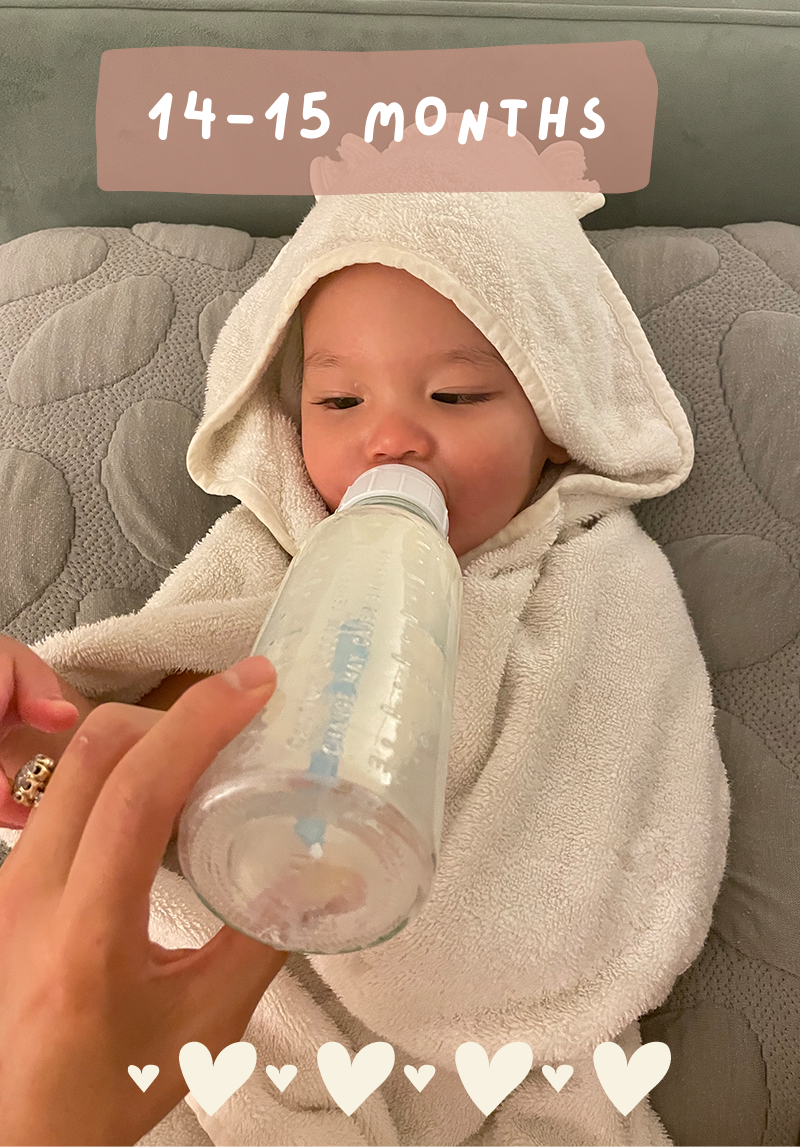 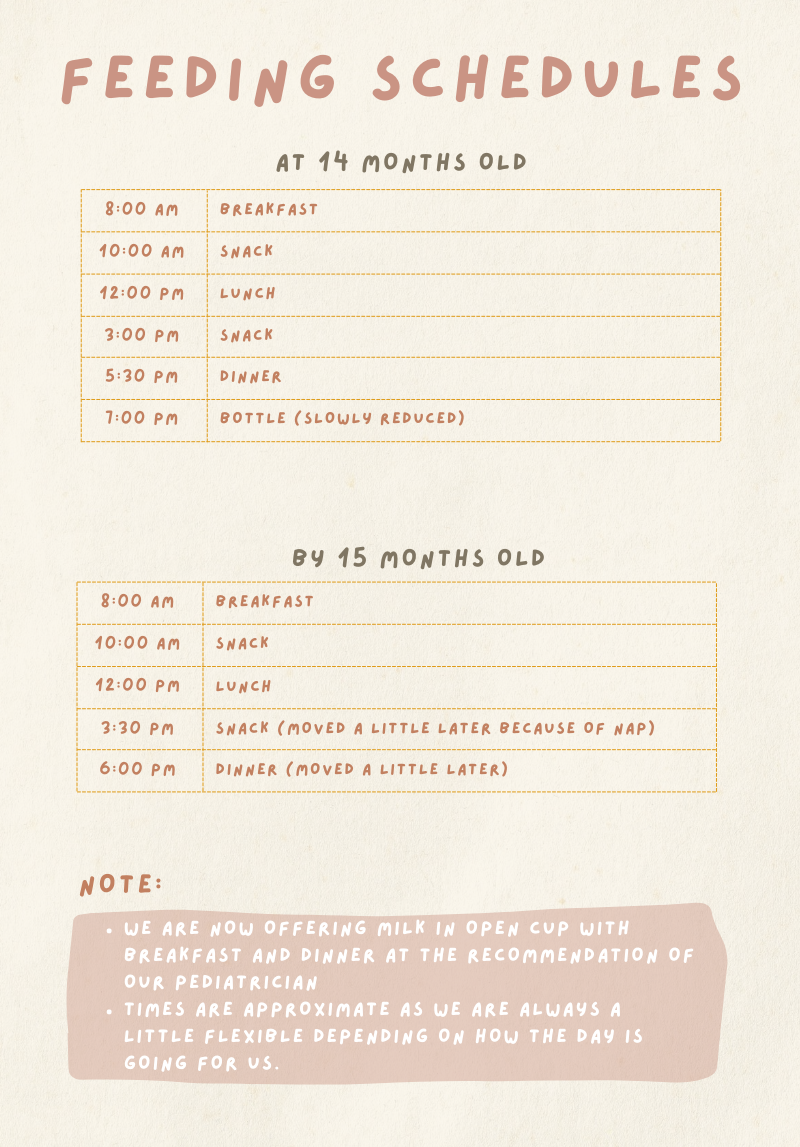